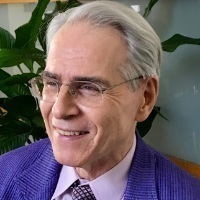 Charles T. Krebs began his professional career with a PhD in Biology & Physiology from Boston University. After teaching marine biology and neuroanatomy for a number of years at St. Mary’s College in Maryland, in 1983 he moved to Australia as a Marine Research Scientist at the Marine Sciences Laboratory in Queenscliff, Victoria. Shortly after his move, a near-fatal scuba diving accident left him paralyzed from the waist down and opened the door to a new chapter in his life. Through his knowledge of anatomy and physiology and his ability to move Ch’i with his mind from years of martial arts training, he learned to walk again. He went on to be Principal Research Scientist, Head of Water Quality Laboratory Environmental Protection Authority of Victoria from 1985 to 1988.

During his period of recovery, he sought alternative and complementary therapies to help him walk better, including massage, chiropractic, osteopathy, homeopathy, naturopathy, acupuncture, and even Filipino Faith Healing. Kinesiology, a form of direct muscle biofeedback, helped him the most. Completely fascinated by this technique, he spent the next 5 years learning everything he could about energy medicine. In 1988 he resigned from the EPA to take up this work full time. He spent time in the US studying Applied Physiology, a physiologically based form of kinesiology, and upon his return to Australia in 1989 he opened an Applied Physiology clinic, Melbourne Applied Physiology, and was its Director from 1991 until his move to the Lydian Center in 2009.

Starting in 1985, Charles began working with clinical psychologists, speech pathologists, neurologists and other health professionals to develop the Life Enhancement Acupressure Protocols (LEAP), a program for the correction of most learning problems. He researches, teaches, and lectures internationally on LEAP, Kinesiology, Anatomy and Physiology, and Neurology.

Charles is the author (with Tania O’Neill McGowan) of Energetic Kinesiology: Principles and Practice (2014), a landmark textbook in the field of Energy Kinesiology. He is the author of two other books in English: A Revolutionary Way of Thinking: From a Near Fatal Accident to a new Science of Healing; and Nutrition for the Brain: Feeding your Brain for Optimum Performance.

It touched me to hear your thoughts on Blue. It has been huge this journey.

HUGE! Fortunately, i was driven to help him & not accept his issues without a good fight.

He has had a bunch of very good marks lately. 16/17/15/18/ out of 20. The teacher only mentioned that he can be a bit dreamy & is not well organized with his stuff & his work. She noted the improvement in results & hopes it will continue. (not as much as i do )

You know how difficult he has always found Lego.. even in the summer we tried.. no chance. Yesterday he worked methodically on an Indiana Jones Lego he got for Xmas. He followed the instructions, alone, & did 26 pages of instructions easily. He said .. this is so easy.. i love it.

It was extraordinary for me to see, I’ve always seen the opposite, blind fumbling, frustration, etc.

I'm touching wood as i write this, I’m cautiously optimistic!

Let's see how the school year continues. He will need to see you again, but at least we can really see progress... & he can see & feel a little of what it's like to succeed instead of fail!